Here’s a little collection of free VST2 32-bit instrument plug-ins. You can use these plug-ins any way you like except for reverse engineering and redistribution, repackaging under another name.
All plug-ins are distributed as dll files and have to be installed manually to the Windows location of 32-bit VST plug-ins, typically C:\Program Files (x86)\Steinberg\VSTPlugins

All content is available AS IS. The only available format is VST2, Windows DLL, 32-bit. There’s no any kind of (guaranteed) user support, update plans or anything but if we receive some positive feedback, we can consider porting those plugins to other platforms and architectures or make something new… or not. Although, if you’re an indie plug-in developer, you can contact us for coop/collab. Look for the email icon in the header. 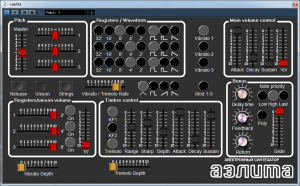 A VSTi plug-in, a functional equivalent of the Soviet synthesizer of 70’s, Aelita. It’s not even close to a real emulation, so please don’t assume how the real Aelita sounds by trying this plug-in, but overall impression and the set of functions are the same or very close, except for added polyphony, glide and buit-in effects.

Lissajous Suite is a set of VST plug-ins dedicated for experiments with the graphical representation of the waves via oscilloscope, but also it can be used for general use, as a complex modern-sounding synthesizer, noise generator and Auto-pan effect.

MIDI Harmonics is an additive-substractive synthesizer and Lissajous curves generator. Synth is based on a half of a quadrature generator: two synchronous sine “base” oscillators having constant phase difference: 90°. Another pair of similar oscillators is also mixed to the base sound. Their frequency is exact integer multiple of the base frequency. The mix can be tweaked with four modifiers affecting both sound and shape.
Quantizer: pixelize curves / applies bit crush.
Sample & Hold: can convert spyrographical shapes into regular convex polygons (dot clusters) with same number of vertices corresponding harmonic number / applies decimation.
Multimode resonance filter: can integrate (smooth corners) or differentiate (emphasize corners) the signal. A usual set of 12 dB filters.
Controlled amplifier: can change the shape size / volume.
Modifiers may be controlled by four envelope generators. 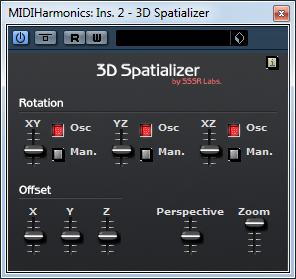 3D-Spatializer draws 2D-projections of 3D Lissajous curves implemented as periodic oscillations on three audio-inputs: X, Y and Z. The objects can be manually or automatically rotated via changing the roll, pitch and yaw. The projection may also be moved, zoomed and different perspective can be defined. The final projection goes to outputs 1–2 that can be connected to oscilloscope in X-Y mode. The outputs 3–4 are binded for binaural audio representation of the processed 3D-object, consisting of oscillation X panned accordingly to oscillation Y and amplified by oscillation Z.
As rotation of the Lissajous curve may be automatic, plug-in also may be used as a specific panning modulation effect. Every parameter may be adjusted via VST-automation. Plug-in must be used as an insert effect in a quadro channel. The first three inputs correspond to axes X, Y and Z; the fourth input is dummy. 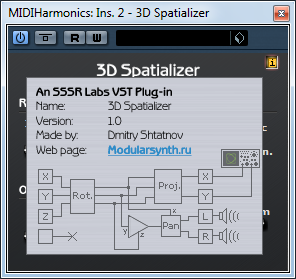 The Lorenz System is a generator of the Lorenz Attractor with variable parameters. The plug-in has 4 outputs, the first three of these corresponds to X, Y and Z axes, and the fourth is dummy. The outputs may be used as sources of chaotic signal or/and may be connected to oscilloscope working in X–Y mode. The orientation of the figure can be changed with the 3D-Spatializer plug-in. Rate of the plot depends on used sampling rate but can be adjusted in the wide range by the slider. All parameters can be adjusted via VST-automation. At some settings may be unstable and stop working. In this case creating a new instance helps.